A scam that left a Montreal student out about $4,000 is circulating in Toronto, with would-be victims receiving text messages promising them $300 a week to wrap their cars in advertisements. Torontonian Angela Day tells CBC News that she was watching a baseball game on Tuesday when she received the text on her 647 phone number. 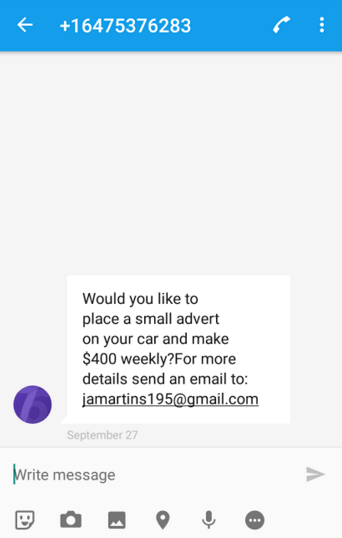 Just a week ago, I got a very similar message (see picture on the right). The text message always involves a very tempting offer to make easy money – but at the same time realistic. Earning $400 for driving around with adverts on your car seems like a reasonable deal.

People falling for these scams are often short on cash. When they reply to the message, they receive convincing, detailed replies about how the car wrapping program works. The car-wrap scammers will often hide behind legitimate company names.

Counterfeit cheque as the job is a scam

Louanne Cataford, a college student in Montreal, received the same text as Day this past August. After some correspondence, Cataford was mailed a cheque for $3,985, and was told to deposit all but $300 into the CIBC account of the graphic artist who was to wrap the ad on her car.

Cataford did as she was told. One week later, she was told by her credit union that the cheque was counterfeit, and that she was on the hook to reimburse her bank. She never heard from the person she had been corresponding with about the program again.

Read more on the ‘car wrapping’ scam at CBC News.