The top thing people should do to avoid being a victim of fraud is communicate with others, be it family members or police, says a staff sergeant with the Saskatoon police economic crimes unit.

March 19,2018 – “You have a scammer and the victim — there’s no person in the middle that can buffer, filter, dissect what’s happening, and that’s the biggest thing people fall victim to,” Staff Sgt. Ajay Chevli said.

Chevli has been making the rounds of late, speaking to radio and TV hosts about some of the top scams operating in Canada. The information drive is a part of the city police force’s efforts during Fraud Prevention Month.

In Saskatoon, the unit most often receives reports about scammers pretending to be the Canada Revenue Agency (CRA), as well as immigration fraud, romantic cons, buying and selling fraud and family members in need scams. While romance fraud happens less frequently, Chevli said the dollar values involved often exceed what is lost in other types of fraud.

The unit sees certain trends emerging: women over 40 tend to be the targets of romance scams, while CRA scams tend to occur in the winter and early spring, when people are thinking about tax season.

Chevli said most scammers induce a sense of urgency. They may also try to legitimize their scam by claiming to be affiliated with a recognizable businesses, organization, government agency or even the police. This can make it difficult for victims to say no.

Chevli advises people not to give out their full name, address, phone number, social insurance number or banking information. This information can be used in identity theft, allowing a scammer to obtain credit or loans in the victim’s name.

In his two years with the unit, he has learned that scams tend to be cyclic — no type of scam really goes away, he said.

“Some things will come in strong bursts and dissipate in a couple of weeks.” 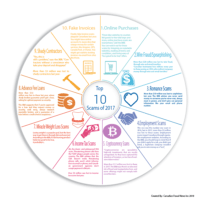