A couple of weeks ago, Judy reached out to Canadian Fraud News Inc. to share her bad experience with an event called Nail Show Vancouver 2016. What started as an exciting event that was supposed to happen in March 2016, turned out to be a very disappointing experience for the clients and vendors. 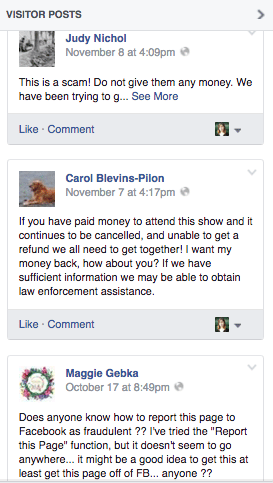 The organizers of the event shared names of big companies joining the event and messaged that tickets were selling quickly: “Book now or be disappointed!” it says on their Facebook-page. They convinced people to buy tickets fast because there were only a few spots left. Judy wrote to us: “It showed that there were only 6 spots left at that time that is why we booked and paid for it in October 2015. We paid for the trade show entry, dinner and a nail course. We also booked the hotel and paid for our flights.”

No refunds for the cancelled show

But the in next month it was announced that the Nail Show for March 2016 had been moved to November 2016, leaving the visitors and vendors with useless flight- and hotel tickets. Judy asked for a refund of the event which was initially promised to her: “Through out the year of emailing the organizer, he eventually said that it was non-refundable and the money had been used to pay the vendors.” After multiple attempts of getting back the money, Judy and her friend decided to go to the show in November: “We figured well if we can’t get our money back, we will just go.”

Two booked trips later, Judy and her friend find out in October that Nail Show postponed the event again, to March 2017. The organization stopped answering any messages, emails or calls. The number that is provided seems to belong to a girl who has nothing to do with NailShow. Judy: “The organizer removed the website leaving a start page stating they are building a better event for the spring. They have been taking money from a lot of people and the fact that they just keep changing the venue dates, who knows how many fell victim to their scam.”

This content is based on reports from victims and potential victims.