EPS seek assistance in identifying a man in fraud investigation

Edmonton police are searching for this man suspected of financial fraud.

The male suspect reportedly deposited a cheque associated with another fraudulent bank account and withdrew a large sum of money before leaving the bank. 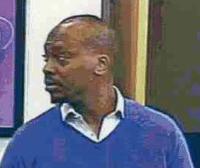 Following this, several fraudulent transactions were reported at ATMs across Edmonton. Approximately $50,000 in funds were allegedly withdrawn between April 4 and April 10, 2017.